The human brain is an amazing thing.

It not only operates the entire body, but it drives ambition, creativity, critical thinking and emotions. These practical functions inspired Roger HB Davies to look into how a person’s left or right brain influenced the way they communicated.

“We asked ourselves how it could be applied to the field of communications,” Davies said. “So we designed a questionnaire, asking a full range of communication-related questions.”

Without knowing, the DNA of communication was discovered.

Davies began his career as a journalist in the early 1970’s as one of Canada’s top business magazine editors. In 1980, he co-founded McLuhan & Davies Communications, Inc. (MDC) with Dr. Eric McLuhan, the son of media guru Dr. Marshall McLuhan.

To this day, Davies and his team at MDC deliver leading business communication workshops worldwide. They teach professionals how to think, write and speak with Clarity, Brevity and Impact®.

“We split the multiple choice answers [from the questionnaire] into three options: right-brained, left-brained, or can do both,” Davies explained. “When we reviewed the answers we were surprised.”

The left brain responses had an emphasis on logic, analysis, sequence, words, spelling and the written word. Right-brained responses highlighted more visual communication; they responded to images, symbols, icons and had a certain “speed” in their communication.

“But it was the third area, the middle ground, where the answers surprised us,” Davies said. “They indicated a preference for such concepts as consensus, dialogue, people, involvement, interactivity.”

“In essence, they focused on the ‘people’ component of all good communications.”

“All were critical pieces needed for effective communication,” Davies said. “All valid, all useful; none better than the other.”

Davies had in fact created communication DNA; a theory of three communication styles that a person uses to relate, engage and connect more effectively.

According to his research, Davies explained that a person can have one dominating trait or combined traits of three distinct communication styles: 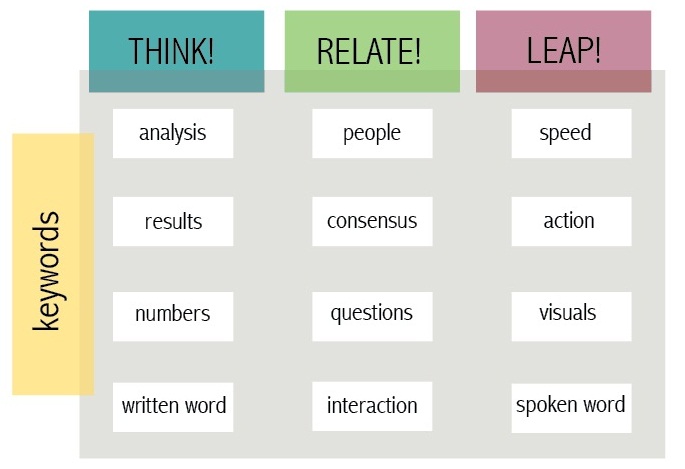 Those who associate themselves under the THINK! category value structure, number sequence and logic; they prefer time to process communication.

Those who assign themselves to the LEAP! category enjoy variety, change and use their time instantaneously; they thrive in high-stake, spontaneous environments.

Finally, those who fall under the RELATE! category value relationships, consensus and flexibility; they ask questions and seek opinions from others.

“We also noticed that many responses to the assessment still didn’t fit neatly into any of these buckets,” Davies said. “In brain research language, these were the communications symptoms of the double dominant.”

Basically, a person can have more than one dominating style.

Further analysis of responses and answers lead to other discoveries from Davies’ theory:

“Wouldn’t it be nice if everyone understood how three styles worked?” Davies asked. “If armed with this knowledge you can shift styles, when needed, to better reach your audience.”

Davies launched his theory into a global brand. Since then, both he and his team at MDC have educated clients and professionals alike on how to identify their preferred method of communication, and how to understand the style of others.

This includes how to manage and lead more effectively. It helps you speed up your exchange of ideas and information. It even helps bridge generational gaps in the workplace. Most importantly, workers know how to assess, adapt and apply these traits in everyday situations.

“We’ve seen the results,” Davies said. “Parents communicate better with their children and each other. Leaders reach and understand their staff. Sales teams adjust their pitch to include all styles and increase their success rates. Customer service teams connect better with demanding customers, teams communicate better among themselves.” The list goes on.

Communication is fundamental to any good business. Whether you’re dealing with the public, investors, clients or your own team, the importance of getting your point across is extremely valuable. As Davies explained, the way we communicate can be traced back to simple science.

And understanding the DNA is the first step towards effective communication.

To get the latest workshops, news and updates, sign up to the newsletter